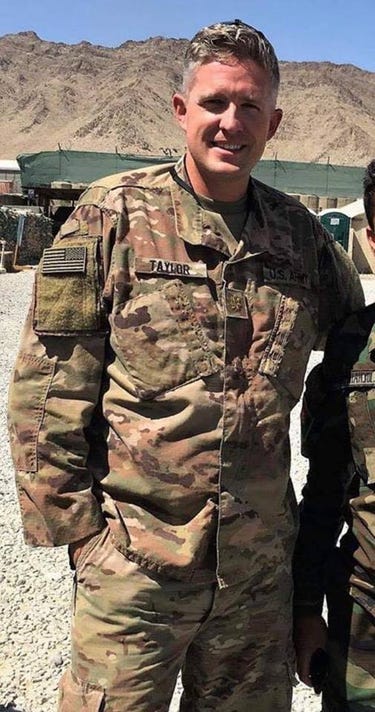 Brent Taylor, a Utah National Guard member and mayor of North Ogden, was injured in an attack in Afghanistan and died Nov. 3, 2018, officials said.
(Photo: Facebook)

A Utah mayor was killed in Afghanistan during an “insider attack” while serving with the Utah National Guard in Kabul, the second deadly such attack in the war-torn country in less than a month.

The Defense Department said one service member was killed and another wounded Saturday by a member of the Afghan National Defense and Security Forces. Initial reports indicated the attacker was immediately killed by other Afghan Forces, the Pentagon said.

“I hate this. I’m struggling for words,” Cox said in a Facebook post. “I love Mayor Taylor, his amazing wife Jennie and his seven sweet kids. Utah weeps for them today.”

The Pentagon said the attack was under investigation and released no other details.

More: Afghan army helicopter crashes, killing all 25 on board

Last month an Afghan bodyguard opened fire at a meeting in Kandahar province  between local leaders and the top U.S. commander in Afghanistan. Three senior provincial officials were killed and three Americans were wounded, although Gen. Austin Miller was unharmed.

Taylor has served as mayor of North Ogden’s 17,000 residents since 2013. He also served more than a decade as an officer in the National Guard, including seven years on active duty. He previously served two tours in the Iraq War and in Afghanistan. He began another a one-year tour in Afghanistan in January.

Taylor, a doctoral candidate in international relations at the University of Utah, frequently posted photos from the war zone on social media. He was consistently upbeat, even noting in an April post that “I absolutely love the dedicated US and Afghan soldiers I serve with every day. The dedication of the Afghan soldiers is especially inspiring.”

His most recent post, Oct. 28, expressed admiration for millions of Afghans who braved threats and attacks to vote in parliamentary elections last month.

“As the USA gets ready to vote in our own election next week, I hope everyone back home exercises their precious right to vote,” he said. “And that whether the Republicans or the Democrats win, that we all remember that we have far more as Americans that unites us than divides us. … God Bless America.”

Hatch on the death of North Ogden Mayor Brent Taylor:

“Brent was a hero, a patriot, a wonderful father, and a dear friend. News of his death in Afghanistan is devastating. My prayers and love are with Jennie and his 7 young children. His service will always be remembered.” pic.twitter.com/UHHbhTciYo

Sen. Orrin Hatch, R-Utah, called Taylor a “hero, a wonderful father and a dear friend.” Utah Gov. Gary Herbert said he was “heartbroken” at hearing the news that a Utah soldier had been killed.

Herbert planned a news conference for later Sunday to discuss the tragedy.

“This war has once again cost us the best blood of a generation,” Cox said. “Thank you for your sacrifice, my friend.”

Ariana Grandes Thank U, Next…

No. 1 Alabamas statement against…

Andrew Gillum Is At Home…

Trumps DOJ Has Abdicated Its…